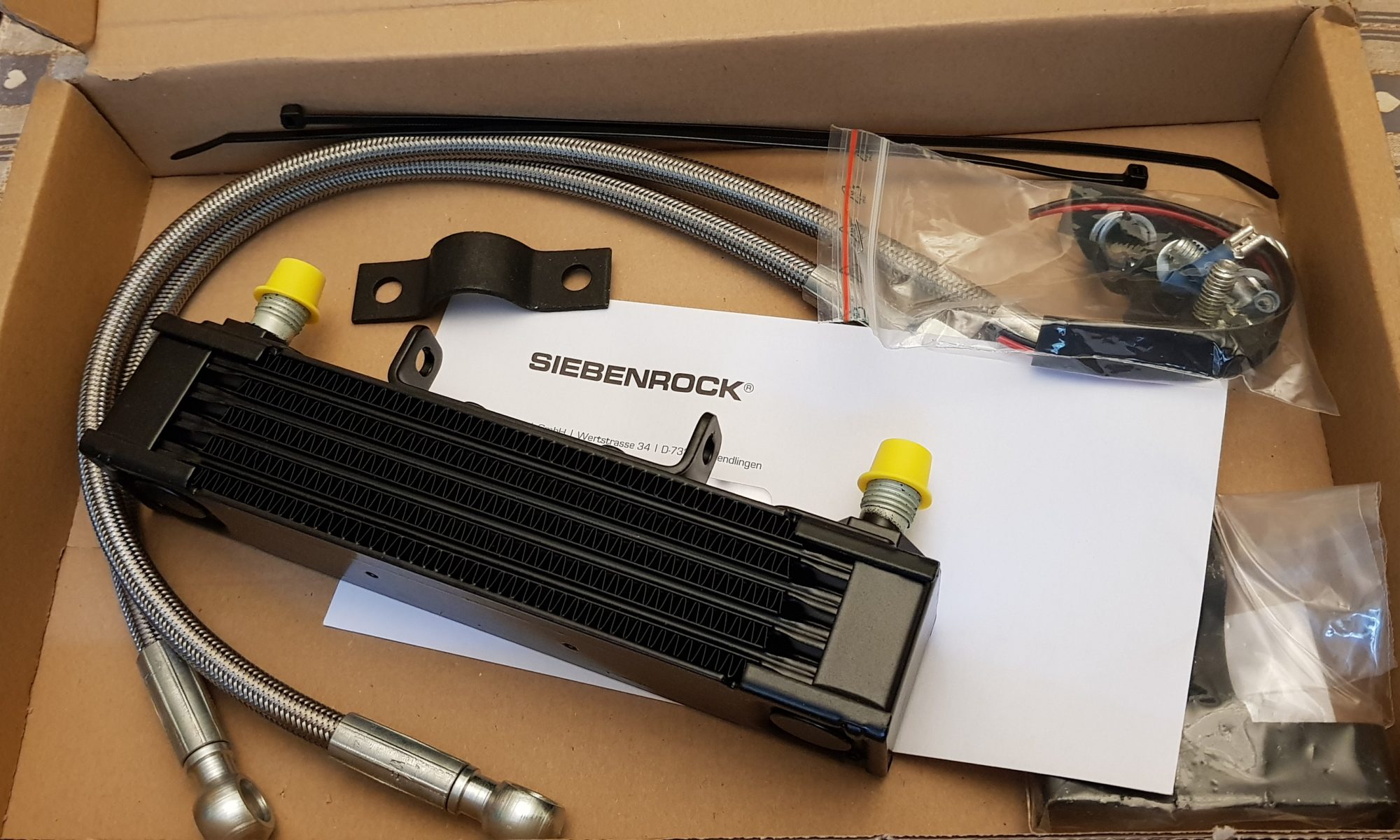 After a few weekends away from this project due to owning a Land Rover and a weekend away in Wales on my other bike (KLR650). It was time to get back to work on the BMW.

Firstly some bolts arrived so I could replace the caliper bolts as the old ones had been rather well abused in a previous life. So with the aid of a I was able to take out one bolt at a time and swap them over to nice shiny A4 Stainless (Marine Grade). I will admit now I am not sure I should be using stainless as I think it should be High Tensile but the bolts are only done up to 32Nm so nothing major.

With that done I turned my attention to the oil cooler. I had an issue due to the fact I have the wrong cooler, the one I was given with the bike was for a newer model of BMW and has it’s mounting points on the top rather than at the bottom. So I took the hit and bought a new one as well as the kit to relocate it to the centre of the frame. With a fair bit of swearing I to get it into location and avoid it hitting the mudguard.

But one slight issue. It hits the fuel tank as I was unable to mount it centrally to the frame as one of the swagged ends is rather close to the engine bars. I did take a file to the cooler in an attempt to avoid the issue but its still not right. Fettle for another day.

Now comes the bit I was dreading for a while, the ignition switch. I don’t have one as such. I have the bottom part of the switch which I was using with a screwdriver to work it. I had looked to fit a second-hand ignition switch but I wasn’t happy at the cost of them and they seemed to be rather hard to locate one. So I took the plunge and ordered a Motogadget M.Lock. Which is a Keyless ignition system which uses an RFID chip to activate it allowing me to feel a bit safer about the bike when it is parked up as the ignition doesn’t take much of an effort to brute force attack it and make it rotate

Along with the sensor and tags, there is a 40A relay to do the switching. I also opted to buy the addon part called the “m.lock Backup Capacitor”, reasoning for this is that this is a large twin and could possibly cause the “m.lock” to disengage as you attempt to start it.

Fitting it wasn’t too hard, I just took the main feed from the ignition system and fed it back into the 3 other wires that off it. The slight are the Side Lights come on with the . Plus the fun that if you have the lights on when turning off the ignition the “m.lock” will but the relay stays so won’t turn off the dash lights until you turn off the .

Its not very complicated and there are a few things that I could do better. For example I could feed the m-lock, the relay etc all from the ignitions source but I didn’t as I was being a mixture overthinking the task and being stupid. There is also lots of wire which I should be able to reduce once I have a permanent location for the RFID sensor.

As I was looking at the electrics I decided it was time to take a look at the wires under the and start to work out how to fit the indicators. A moment of nnoyance when I found some electrical tape hiding some twisted pairs of wires, now secured with a WAGO Electrical Connector as I don’t have enough room to get a crimp tool in there to do it properly. They are nice as you lift lever, poke the wire in, close lever and the job is done.

I have bought a set of LED indicators as I am missing the BMW originals and didn’t want to spend the money on those. I have some nice bright and smart looking ones. I went about the front end first and fitted connectors so I can plug and unplug them as suited. As usual with me, I then took the time to reassemble to head cowl properly as previously I was missing quite a few of the bolts and nuts. A lot less wobble now. So work began on the rear indicators and having connected the indicator I was able to test that it works. Though as you can see by the video I still have work to do such as fitting the load resistors and finding a way to mount the rear indicator. But it was starting to get late.

One final video for this post. When I drained the oil a few weeks back it seemed to be rather thin and smelt of petrol. So I have replaced the oil but I am starting the bike up and letting it run for a minute or so just to warm it up and to move the oil about, once I have done a few more of these I will do another oil change and also change the filter. As you can see it is burning some oil off, there is a drip of oil coming from the collector box so I am hoping its just the petrol/oil mix being moved out.