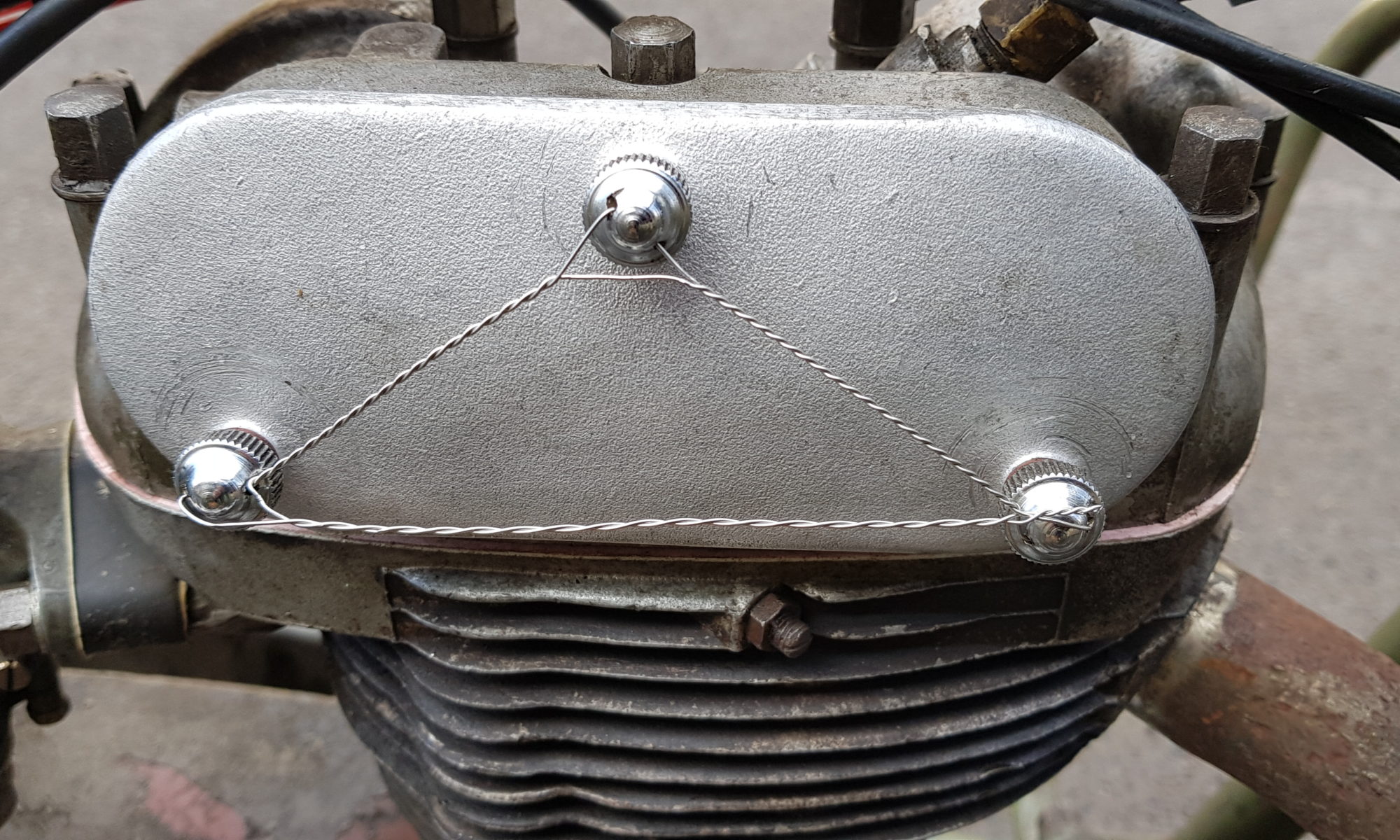 The Matchless now runs but as with all things, there is always more to do. I wanted to get the bike on the road and take it for a ride but there was a few things annoying me. The worse being the fuel tank mounting.

Since I got the bike all those years ago the removal and refitting of the tank have always been a task. I even bought the correct bits for it which just didn’t come close. A few questions asked on the owners club forum and I was informed the correct bolt is a 5/16″ x 26tpi Cycle Thread bolt of 1.1/4″ in length.

The threads into the tank mounting have been damaged and other bolts have been forced in. I plan to drill, tap and use a wire insert (aka Helicoil) a 5/16″ x 22tpi BSF because I have some inserts leftover from the cylinder head work I did a few weeks ago.

I managed to tap the top nut with ease and that made me feel good, even if the swarf from the drilling did cut up my hands a bit. As I found out the next morning when I did the washing up in rather hot water. But back to it, the lower nut for some reason would not drill, I have tried sharpening drill bits, using other ones etc but no luck. Rather than get overly annoyed I have decided to order some 5/16″ nuts with the mindset of just griding these off and then visiting my Uncle Jamie to see if he will weld new nuts on for me (c’mon I have only just upgraded to an Angry Grinder – They are Always ANGRY).

To fill my Shed time with something productive and because the Stormy weather was actually Sunshine (in Somerset) I felt I had to carry on. I decided to fit a new battery as the Battery I recently bought for the bike has a fault and is only giving me 4 of the needed 6V. I did some googling and found this interesting article from a fellow Matchless owner which talks about fitting 2x Hawker Cyclon 0809-0012 6V 5Ah batteries to the bike and wiring them either in series (12V) or parallel (6V) and that would give you 10Ah and fit in the Lucas battery box. Well, I don’t have a Lucas box so not much use to be so I opted for the 6V 8Ah version going on the assumption that I don’t really use the bike a lot and that battery would still fit and is quite compact.

There isn’t a fuse there at the moment and I think one of the next jobs will be to fit one. I am not worried about it taking up space there in the box because unless you carry a screwdriver in your pocket it isn’t easy to open.

The bikes Coil sits under the tank and often is in the way when we try to refit the tank so as I had the electrical bits out I thought I would see if I could move it to the airbox area or some other convenient spot.

Not too bad and it may change but just for now it works.

I told you it works. Some of you observant people will spot another little job, I used some lock wire and special lockwire pliers to lock the rocker cover nuts in place, they have a habit of vibrating loose. This will have to come off to adjust the pushrods at a later date. For now, it is just, starts it, warm up and let cool. The clear bit of pipe near the head of the engine is on an oil feed pipe and there so that we can keep an eye on the oil, which is fun as its a light green at the moment.

I haven’t done it to book as there is a technique which means that you tighten rather than loosen the bolts thanks to the tension applied by the wire.

Now to wait for the bits I ordered, including a posh Reg/Rectifier as I suspect the original device isn’t working as it should be.