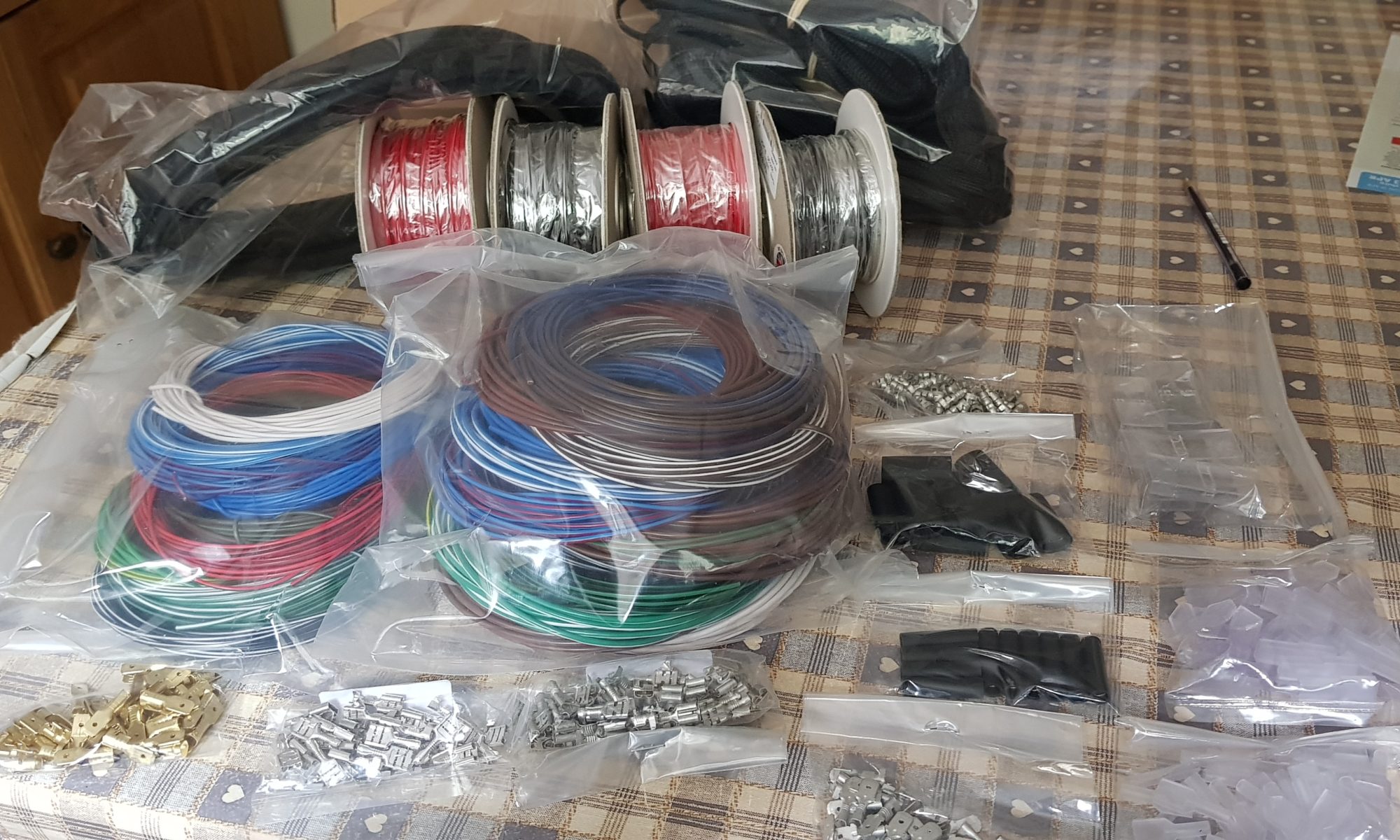 I bought a Lucas loom, it didn’t work. I suspect I could make it work but considering I have moved the coil and added a modern rectifier I thought I might as well make my own. So an order went into Vehicle Wiring Products for some wire with the right colours stipes on and a selection of uninsulated Bullet (4.7mm/0.1850″ for the old bikes), and spade connectors.

I ordered wire in 1.0mm² (16.5A) and 2mm² (25A). I did some tests and the bike uses 11A but the larger wire diameter means a little less voltage drop. I got the 1mm² in case the 2mm² was way too big for my needs. Turns out the 2mm² was about the same as the old stuff. I took the original Matchless wiring diagram for my bike and added some colour to help with the wiring.

Now before I could start I had to sort, so the boxes of electrical bits came out and I procrastinated for a while sorting out the bits. This won’t be the last time. By the way, I have a large selection of Red and Blue insulated crimps with heat shrink, I have gone off them as a few times now I have done the crimp and it’s just pulled out, this could be a wire gauge issue or a crimp tool issue but I am converting to uninsulated crimps as I can get a good grip when crimping.

With that done and a cup of tea I started to look at the old loom. Its rather basic but I would like to have a neat loom.

I started off with tying the wire together with bailer twine so I could work out where the wires go an where they branch off etc.

Now I ordered 5m of each colour I needed to be safe, which means I have plenty left over for other projects.

With the basics done I started to think about how I was going to get the sleeving on. I had gone for the Braided Sleeving which is a pain to work with but does look nice once done. But with several cups of tea, I managed to get it on and the wires branching off where I needed them.

Then I added heat shrink to prevent the braid from falling to bits.

Now I have done the basic bit of the loom. I will fit it to the bike then make the wires shorter where I need them and then start crimping. I added a length of protective sleeving to prevent any undue wear from the tank and steering.

There is an extra wire in this loom, a red one. Its to run an earth (remember positive earth) to some where in the headlight as a backup. During this process I thought that I needed more eyelets to crimp on, I have a few but I ordered some to add to the collection, plus a new horn/dip switch and a new rear brake switch. This re-wire won’t be cheap but I enjoy having a go at stuff and learning new/developing skills.

In other news, I also challenged my friend with a Welder, “This Old Hoddy” to make me a tool for taking the inspection covers off the bike. It is rough but does the job. I just don’t like using a screw driver to undo them.