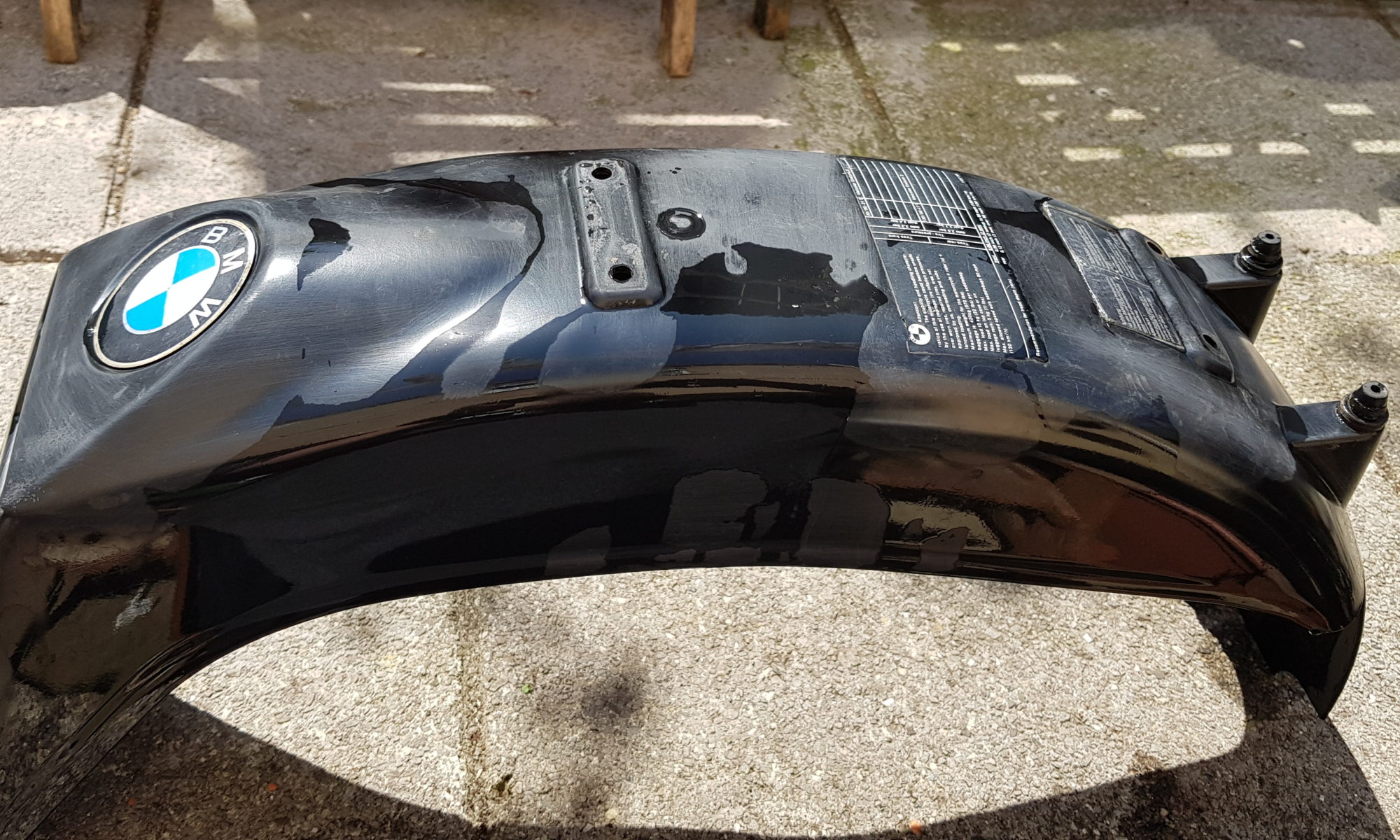 I had a birthday recently, I spent that weekend painting the BMW. At the end of the day, my Dad’s only disappointment was the hacked up rear mudguard and how rubbish it looked. So as a present he offered to buy me a good second hand one. So moments later I ordered the BMW brake light from Motorworks and a more paint from Craig at Buzzweld because the mudguard we found was, of course, the wrong colour.

The guard eventually turned up and as I had to take some Holiday during this COVID-19 stuff I thought oh well might as well do something with the time.

A quick scrub down and I masked off the stickers and the BMW logo. Then out with the paint. I chose to go red again as it covers well compared to the white. and I thought I like to be different.

Then came time to fit, oh how much of a pain that was. It decided to interfere with the Metal Mule Pannier kit, and so, therefore, got a few scuffs in the new paint. I will touch that up another day. I took the opportunity while the mudguard was off to paint some Coo-Var Rust Converter as I do plan to repaint the frame one day but not just now, but I would like to prevent it getting any worse anytime soon.

Looks a lot nicer with the proper guard in place and I have got rid of the horrible bracket for the numberplate. Decided to fit the new brake light so the LED one I made had to be removed.

The indicator bracket I made up one afternoon looks like it needs to be removed and something else made. The Resistors for the Indicators also needs to move now. I am thinking under the seat on a new mount.

One of the other things I have been meaning to do is sort the Screen mounting points but I can’t seem to get the BMW bolts which are M6 with a 10mm spigot on top with an M5 tapped into that. I asked a friend if he could have a go so “This Old Hoddy” made up a few, they are interesting as he is still learning his lathe and Mill. I needed 4 but he had only made 2 that could be used.

But he told be he had ordered some hexagonal bar stock and would be having another go. A week later and he had done them, I collected on the way home from work kept distancing rules etc I even left them on a bag for a few more days before taking them out for a clean etc.

With a 17mm spanner head on them etc etc. But they fit and look right and they are mostly hidden. As the ones Hoddy made for me were plain steel I had to treat them. The idea of Cold Bluing them sounded like a good idea. Its a technique used on Guns to give them a layer of dark blue rust that can be oiled and precents the red rust we are all used to. Ordered a bottle and gave it a go, as I did this I asked some of the Ixies on Ixion and they were strongly against it but it was too late I had done it.

Doesn’t look too bad, if it doesn’t work I will take them off and either spray them or get them treated. I am trying to avoid buy a DIY Zinc plating kit but I am getting weaker by the day.

Fitting the screen etc was rather easier than before as I now had the right sized bolts and wasn’t faffing about.

You might also noticed I fitted the head light surround, using some more of the 3M double sided tape. With the evening starting to draw in I decided to give the headlight grill I found at the bike show a bit of a spruce up.

I went for white to go against the red. Now she has pretty white teeth to smile at others as she goes by. Maybe then people wont stare at her saggy pistons (she isn’t a MV).