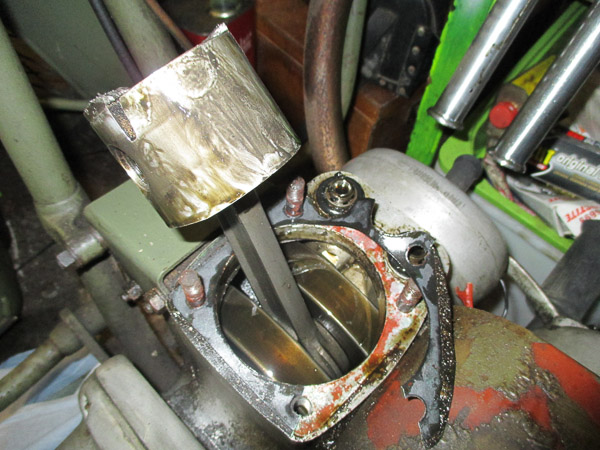 Over the weekend I ventured into the shed, admired the offerings to the Geds that hang on the garage door. But I had to stop as I was getting cold and I wanted to do a bit of work on the Matchless.

First, the battery came out, and that proved that after 5 years that the battery is ducked, well its showing 1V, I will give it a go on the charger but holding my breath.

Then it was time to have a look at the task I was in there for. Recently my Dad has restarted working on the bike again, but after breaking a piston ring we had to wait until I could track down some replacements. As he was getting ready to do that he then mentioned that some of the threads holding the rocker cover down are the best part stripped,

Now I made the mistake of going onto the forum for the Matchless owners club and looking up the parts diagram and finding the bolts stated “Rocker Box Cover Bolts” and that part number relates to a list of bolts. The mistake was assuming that the data was correct, and it is if you own a twin. So I ordered the wrong thread inserts. That meant I had to measure them at which point I got the right ones. Remember the Matchless is pre Unified so you have BSW, BSF & BSC all on one bike, thankfully these days I am a bit more clued up on threads so it doesn’t daunt me as much now. Armed with more info I ordered the correct inserts, and some extras as well.

and more. Some of you will notice there are two taps in the case, that is something I have now learnt, you have the tapered tap and a second tap that is for finishing the thread off.

But back to the Matchless, after attacking it with a drill I had a clean hole.

Then a quick insert,

I even used cutting oil which does half make it easier,

Need to think about getting or making some more bolts like this as these do look a little second hand, I have found stainless ones but that isn’t wise with an Ally Engine.

After all that I wanted to rest for a bit so I found a bag of random bolts we picked up at an event and I took to sorting them.

Yes, I am a sad person, I have all of them sorted by size and length this is supposedly called Knolling. They go into neat storage boxes so I can find them when I need them. But these are Metric so not much use of the Matchless.

But back to the Matchless, we removed the valve springs etc so I could clean the head and so that we could re-lap the valves. Upon re-lapping it was noted there was a slight issue with the valves.

Yup, that’s right. They are bent. To give you an idea of the failure we are talking about here is some pictures of the state of the piston.

So this week I have been awaiting new valves, which turned up tonight with a tool for fitting the springs as the special G-clamp we have died.

The tools use is still to be tested but the manual does show how to use it.

That is it for now, this weekend is the Classic Bike show in Shepton Mallet and I am trying to avoid buying another basket case bike, last year a BMW R100GS PD followed me home.