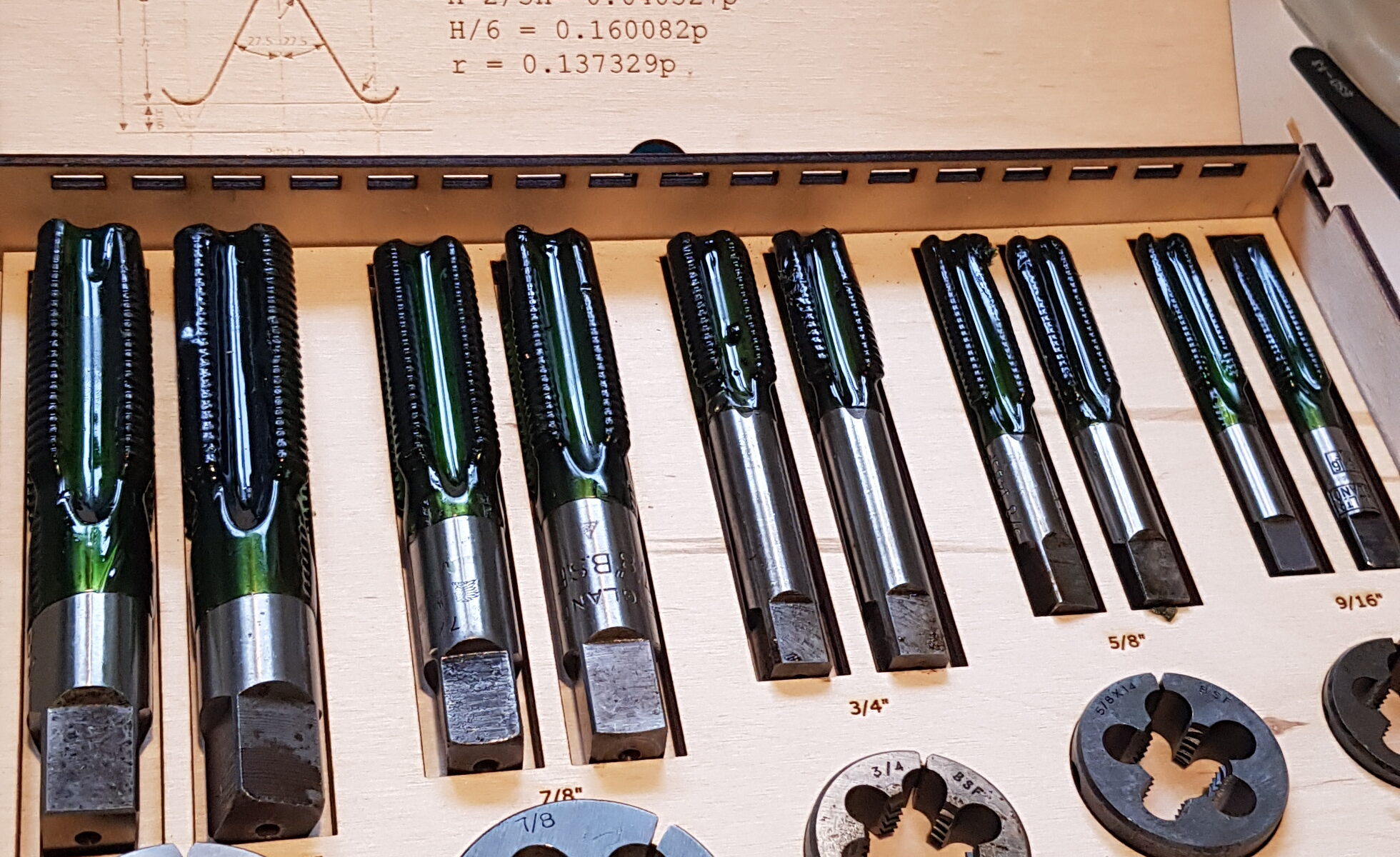 Last year I made a few purchases of Taps and Dies for cleaning/chasing threads on the Matchless and other projects. This is partly helped by my job as I am now a lot more aware of the array of threads used on things.

I ordered the bits from Tracy Tools down in Devon and ordered them loose so not in a case, I have seen sets in cases at shows but always disappointed about the standard of the taps and the cases.

So I made my own cases,

I have some gaps, that is because the tap normally come in sets of 3, Start, Second and Bottom but the sets I bought only had the Start and Bottom taps. The inserts for the boxes are basic and loose. Once I am happy with it all I might give it a varnish but this is just version 1.

So randomly looking at eBay one evening and I spotted a bit of test gear for Clare Flash Testers. I have the task of calibrating these at work and the chance to get a bit of kit for actually testing them was beyond tempting.

Next thing I know I had bought it, followed shortly by some other bits such as a Resistance and Capacitance box. Not sure why other than its nice to have some stable things to check my new multimeter against (more of that later).

I can’t seem to find much info on this unit as Clare has been bought out and is now owned by Seaward. Though I did find a page referring to a Seaward V242
https://www.tequipment.net/SeawardV242.html

The V242 is intended for on-site verification of the Clare range of electrical safety testers. It is recommended that this instrument is returned to Clare Instruments for annual re-calibration.

The V242 is capable of checking the following parameters.

The flash trip value of 5 mA can be checked using the Insulation Resistance value of 200 KΩ, which will give a reading of 5 mA at 1000 Volts A.C. or D.C.

No facilities provided for checking live load modules, such as ammeters and wattmeters, fitted to many Clare test stations. Such modules should be checked using a good quality AC test set.

Annoyingly someone has stuck stickers on the instruction sheet, I am looking at how I might be able to remove them. The brass/copper connectors on the front are also in rather poor condition so I thought I would open it up so I could give it a clean.

Now that I could see inside I noted it is rather basic. More importantly I can get to the nuts to remove the posts. So I removed one and had a go at cleaning it in a solution of salt and white vinegar.

I will admit I did make a mistake with cleaning some of the bits as I put them all in the same cup. The washers are zinc and that attracted the copper so ended up with the bits going black, but thankfully it only took a little light cleaning with a copper brush. The next connector I did them separately.

What will I use it for….I don’t quite know. Might take it on-site the next time I have a few of the old Clare flash testers to look at and see how it compares.